Our products in the B2B world– interview 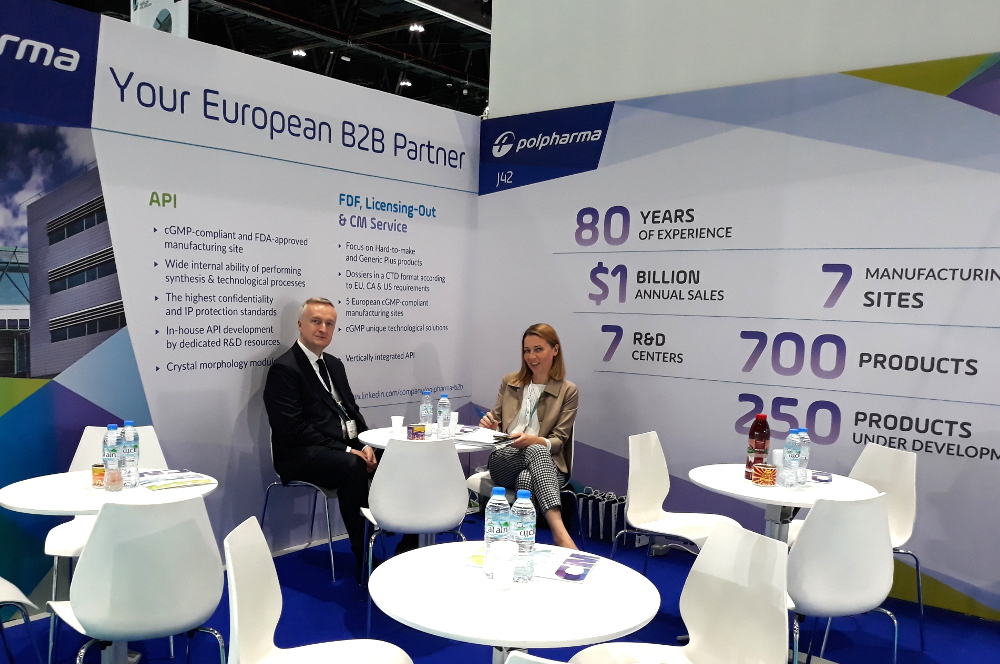 (on the left: Pawel Muszynski, on the right: Karolina Kielb-Bruchmann)

During the year, Polpharma B2B Department travels around the world to meet our business partners.

After the CPhI Abu Dhabi, we managed to interview Pawel Muszynski, Senior Sales Manager, a representative of the Central Europe and Middle East region, about the emotions accompanying the fair and the preparatory period.

Grazyna Stachowska-Maruszak*: What are your impressions after Abu Dhabi? As far as I am aware, this was the first edition of the fair in this region?

Pawel Muszynski: Yes, this was the first CPhI in the Middle East and my first local CPhI.
For some time now, Polpharma B2B is much more resolute in taking part in the local editions of fairs due to business potential of such regions as India, China or Arab’s world.

GSM: Was there something that surprised or astonished you? What were the differences between the fair in Abu Dhabi and the European one?

PM: The main difference was obviously the scale. In Abu Dhabi, the most conspisious stands belonged to strong local players who wanted to demonstrate their position in the region and present their offer.

During the CPhI Middlea East & Africa, I was expecting targeted contacts and meetings with our business partners or those who are interested in Polpharmas’ products… Hovewer, reality exceeded my expectations. A great number of people visited our stand and each of us had about 20 meetings per day.

And speaking of more down to earth things, excellent air conditioning in the hall, which managed to keep the extreme heat outside away, as well as fantastic organisation were a surprise to me.

At the end of the day, there was a whole lot of taxis outside the hall waiting for the participants of the fair and not the other way round – as is the case with the European CPhI.

GSM: What was the thing that attracted participants to the stand of Polpharma?

PM: The majority of them has already been familiar with our company. However, some visitors took an interest in our company due to our presence in the European pharmaceutical market and the fact that we are already well-known there.

It is true that the companies, products and substances stemming from Europe are highly appreciated in the Middle East.

GSM: Can you describe to us the preparation period to such fair? Is the fair the final element of your work?

PM: Preparations for the fair starts as soon as the stage of planning the budget for a given year. At that point, we have to decide in which fairs we want to participate and estimate the cost of our engagement.

The next stage, which takes place a few months before the fair, is dealing with formalities which can prove to be more complex in case of fair outside Europe. This stage comprises administrative and organizational tasks and it would doubtlessly end up in a failue, if it was not for the support of ther departments within B2B, e.g. Marketing Department or assistants.

As the date of event is nearing, we are preparing folders and scheduling meetings.

The fairs itself equals to days filled up with meetings.

GSM: Do you plan to participate in the next  year’s CPhI Abu Dhabi?

PM: I think that our presence in Abu Dhabi this year was principal. Due to its rapid development in the pharmaceutical sector, the Middle East is bound to change and it would be good, if we have a proper understanding of this market, and emphasase our presence as a reliable business partner.

GSM: And the last question, do you like your job? 🙂

PM: Of course! I have worked in Polpharma since 2000, with a short break. I was engaged in various areas of business. The one related to B2B sales is a novelty to me but it makes for an interesting challenge – and you need challenges to further develop yourself.